The winter of 2011 brought an unusual amount of ice to the Atlanta area. A sudden storm left roads impassable, and schools and businesses shut their doors as Georgians avoided the layers of ice and blistering cold that had engulfed the city. Just south of Atlanta, an under-construction hospital was left to weather the storm with little more to its walls than DensGlass® Sheathing from Georgia-Pacific Gypsum. And its performance would determine whether or not the new Piedmont Newnan Hospital would stay on track for its planned 2012 opening.

Consolidating a Sprawling Campus
While Newnan, Ga., was known as being a hospital town during the Civil War, recent rapid growth has found the city in need of a new hospital facility, with services consolidated into one campus. While offering comprehensive healthcare services throughout the city, Piedmont Newnan Hospital offered its services in five offices located in different parts of town, making it difficult or confusing for some residents to immediately identify the appropriate location. The prospect of building the new Piedmont Newnan Hospital had been planned for some time, and given the growing demand for a new hospital, the project was initiated with the new hospital expected to open in early 2012. The new Piedmont Newnan Hospital will bring all health services, including critical, general care and post-partum care, together under one state-of-the-art roof. The 362,376-square-foot facility is being built to obtain LEED certification and will feature a green roof. The use of Dens® Brand gypsum products in the construction of Piedmont Newnan Hospital speaks to Georgia-Pacific Gypsum’s leadership position to manufacture gypsum products that aid in overall structure performance and sustainability.

Moisture Resistance Minimizes Risks
“The durability and versatility of the Dens family of products is what drove our decision to use these products in the hospital,” said Jeff Tyner, Perkins + Will, the architectural firm on the project. “The products address several areas of
concern in healthcare, including moisture management and impact resistance.” Piedmont Newnan Hospital features Georgia-Pacific Gypsum products in many parts of the building, including DensGlass Sheathing, DensGlass® Shaftliner, DensArmor Plus® High-Performance Interior Panels and DensDeck® Roof Boards.

The Dens® Brand fiberglass mat gypsum products were selected based on their ability to meet the unique demands of a medical setting, based on a history proven performance. Uniquely designed with fiberglass mat facing instead of traditional paper, Dens panels may withstand moisture without succumbing to potential mold growth issues that have caused builders to need costly replacements after an unfortunately timed rain shower during construction or leaks after construction. This potential mold growth reduction is a great benefit to hospitals striving to create a sterile environment*. DensArmor Plus® panels are GREENGUARD listed as microbial-resistant using ASTM D 6329 methodology and have scored a 10, the highest score for resistance to mold growth, based on testing, as manufactured, per ASTM D 3273.

Additionally, the frenetic pace of activity in hospitals makes impact resistance and the ability to withstand heavy traffic a necessity. The use of DensArmor Plus in interior walls, instead of paper-faced drywall, helps to prevent damage to the walls caused by scuffs, dents and other abrasions.

Unique Roofs Call for Durability
One of the most anticipated features of the new Piedmont Newnan Hospital include a green roof over part of the building. DensDeck® Roof Boards will help form a high-performing roofing support system that can ensure the vegetation on the roof is the only thing that stays watered.

Planning for a Successful Hospital
While the unexpected ice storm may have kept the crew from working on the new hospital for a few days, the project was not set back due to the need to replace moisture-damaged panels. This is due largely in part to the fact that DensGlass® Sheathing features a moisture-resistant core and enhanced fiberglass mats, instead of paper facings, to resist the effects of moisture exposure during and after construction. Georgia-Pacific Gypsum backs it with a 12-month weather exposure limited warranty (complete warranty details are available at www.gpgypsum.com or by phone at 1-800-225-6119).

“The DensGlass stood up to the ice, wind and cold without any issues at all – no mold and no water damage – meaning that there was absolutely no need to replace panels the way we would have if we had used a paper-faced gypsum board,” said Tennent Powers, project manager, Collins and Wright, a commercial drywall contractor based in Columbia, South Carolina. “I was never worried. We knew DensGlass would stand up to the elements.”

*Infectious diseases from molds can occur in people with weakened immune systems, such as those who are immune -compromised or immune-suppressed from drug treatment, according to the Illinois Department of Public Health. 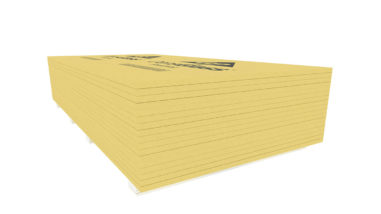 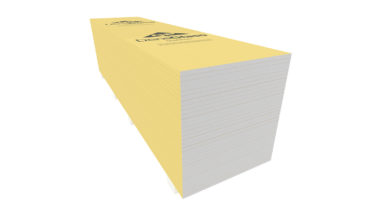 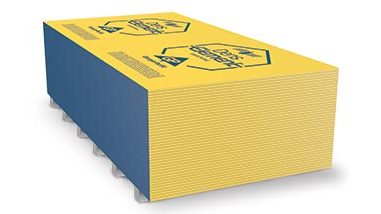