Hail the size of golf balls, wind gusts up to 60 miles per hour, and more rainfall than residents have seen in the past century1—it’s not a scene from the next apocalyptic blockbuster movie, it’s the climate trifecta this Texas construction team was up against while trying to construct their next important data center.

To say their work environment was stormy would be an understatement. Yet, that’s exactly where the construction team found themselves in April 2019, the wettest mid- Spring month on record in decades.2 Data centers are notorious for tougher roofing assembly performance requirements, but these challenges took the project’s demands to a new level.

Requiring additional performance capabilities from the design and materials, data center owners expect more protection to hold these important contents than average roofing assemblies can provide. In the middle of America’s Hail Alley, that means strength to withstand extreme winds, rains, and hail events. So, this particular structure demanded an unstoppable Basic Design Wind Speed that could withstand 3-second wind gusts up to 140mph.

Adding to these demands, data center owners are driven to get these buildings up and operational as quickly as possible so they can start generating revenue. With data now considered to be the world’s most valuable asset,3 protection is an imperative and time is at a premium. 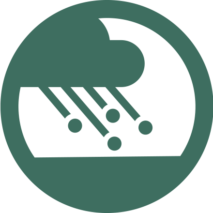 "We would always recommend DensDeck®. Not having it, you’re sacrificing durability and long-term potential life of the roof."
‒Jarrell Perrin, Roofing Contractor with Sun Commercial Roofing

The Dallas-area build crew’s workload wasn’t enviable. With owners determined to get up and running quickly, the pressure was on to get dried-in and ready to store data.

With epic storms at their backs, the team needed to outsmart the weather, not be held captive by it. In his decades of experience in the construction of such buildings in all sorts of conditions, Rick Chappell, Strategic Account Specialist for Sika Sarnafil Roofing Systems, knew this project would take skillful planning. He also understood the necessity of having a temporary roof assembly to take wind and rain out of the scheduling equation.

The plan had to be reliable: Install a portion of the assembly using materials that could act as a temporary roof. With many different trades coming up to the roof to complete installation, the roofing contractor needed to provide wind-uplift resistance to withstand impending storms and build in durability to protect against foot traffic.

Data center construction calls for unique capabilities that go above and beyond typical commercial construction requirements, the architectural firm built extra redundancies into the assembly design.

“With a data center roofing assembly, we look at redundancy more than anything,” said Chappell. “One drop of a water leaking into the data center will destroy everything.”

After working with DensDeck® Prime Roof Board on previous jobs, it quickly became the architect’s go-to solution: functioning as both a thermal barrier and a cover board.

For Chappell, a twenty-plus-year veteran of the roofing industry, has observe the dependability of gypsum roof boards for roofing assembly designs. Not only does the thermal barrier provide a good surface for the installed roofing system, he elaborates, but it also enhances the high wind uplift resistance.

“Having the ability to attach the thermal barrier to the steel decking and to apply the vapor retarder over the thermal barrier will allowed the interior building construction to continue. You’re not waiting on the different phases of the roofing assembly to “dry-in” the building,” Chappell explained. “And the ease and quickness of application is great!”

For the thermal-position in the roofing assembly, Roofing Contractor Jarrell Perrin and his construction team at Sun Commercial Roofing installed 5/8-inch DensDeck Prime Roof Board to a steel deck with a robust vapor retarder on top. Perrin noted that this provided a good adhesion substrate, bonding easily without requiring fasteners that would come through the roofing assembly.

This dual DensDeck Prime configuration made the roofing system a worthy adversary for rain and wind. The EONIC™ Technology in DensDeck Prime Roof Board doubles the board’s resistance to moisture, making it the only roof board to meet the industry’s tough new Three-Part Specification for moisture resistance.

Equally of note, the onsite contractors prefer it, said Perrin. “The guys like DensDeck because it’s easier to cut in the field and it’s lighter to handle. So, they can move the material around site a lot easier,” he said. “They would choose the DensDeck board for those two reasons. We really enjoy working with it in the field over other products. And if the guys like working with it, it makes everybody’s life a lot easier!” Against time and requirement challenges, teamwork and multitasking were at the heart of a successful strategy for this project. By using DensDeck Prime Roof Board, along with a robust vapor retarder, they were able to install the rest of the roof and more quickly dry-in the building. Then the rest of the team could get to work constructing the interior, while the exterior trades finished installing the rest of the roofing components—yielding a solid final construct that can withstand all kinds of wear and tear.

Foot traffic is a major concern with data center construction. With the roof now installed, the team’s attention turned to the various tradespeople who would be treading on the assembly. From welders to steel outfitters to plumbers—anywhere from twenty to thirty people working for up to three weeks—the roofing assembly needed to provide sturdy protection against ongoing foot traffic. Given that the building houses such sensitive materials, the redundancies and extra precautions in using DensDeck Prime as a thermal barrier and cover board help to provide extra protection against any roughness the roof will endure, including the extreme hailstorms that the area is known for.

“Having a hard board, gypsum core, underneath a single-ply membrane provides a high compressive strength needed in defending the thermoplastic membrane against hail impacts, Chappell explained. Having a cover board gypsum core, the hail impact is minimized.”

“We like DensDeck Prime because of the extra protection it gives,” adds Perrin. “DensDeck adds to the long-term stability of the roof: the hail resistance and extra puncture resistance long-term.”

We take extra precautions to protect the things we value most. For the build team, DensDeck Prime Roof Board with EONIC Technology was the key component in constructing a roofing assembly to provide durability in withstanding potential moisture and impact damage.

In data center roofing, strength and longevity are crucial. Weather concerns aren’t just critical during construction; the roofing must ensure strong protection to keep millions of

dollars’ worth of equipment safe from any outside conditions and last over time. DensDeck Prime Roof Board with EONIC Technology has the flexural strength and resistance to moisture that gave this build team the confidence to put their name to their work.

“We would always recommend DensDeck. Not having it, you’re sacrificing durability and long-term potential life of the roof,” noted Perrin. “Our ideas and name are on the line more than anything. We just want to be synonymous with a good product. So, we need something that’s provable, skilled, and long-term.”

“I’ve seen the growth and innovation of cover boards over the last 20 years,” said Chappell. For me, using cover boards and thermal barrier boards are an integral part of creating a roofing assembly. Cover boards helps to increase the wind uplift values of a roof assembly by providing a strong, high performing layer of protection.”

As more storms pass through and time goes on, this Dallas data center will stand strong, protecting business’ most valued data assets—deep in the heart of Texas.