Is Your Rooftop Ready for More Foot Traffic?

In cities around the world, apartment residents and office building tenants are expanding their quarantine safe spaces to include rooftops. Is yours ready to take the load?

As the first hotspot of the COVID-19 pandemic in the US, all eyes have been on New York City for several months. New Yorkers dealing with lockdown restrictions have taken to their rooftops to get a break from 24/7 apartment living.

“During the lockdown, city dwellers went out on rooftops, not only to get some exercise in the fresh air, which seemed to be the most favored rooftop activity, but also to work, make calls, fly a kite or a drone, dance, read a book, play an instrument, make art, drink coffee, do sunbathing or gardening, have socially distant conversations with their neighbors, or wave to neighbors from next roofs,” says Monika Hankova in her recent article for Untapped New York.

Hankova also notes that building rooftops were the setting for safe nightly gatherings to applaud New York’s front-line workers. As everyday heroes switched shifts at health facilities, came home from long days, or left to start their long nights, the 7 p.m. rooftop celebrations – a trend that began in the UK and was adopted worldwide – gave neighbors a chance to both show their gratitude and get outside for a little while.

On a lighter note,

Going Out by Going Up

Now that many cities are cautiously reopening, businesses are looking to rooftops as venues for serving more customers.

When Massachusetts entered its second phase of reopening, dining was only permitted outdoors with tables spaced at least 6 feet from each other, and only six diners per table. Expanding beyond patios to rooftop dining allowed restaurants to seat more diners while still maintaining social distance.

And now that America’s favorite  pastime is finally making its summer debut, rooftops may be one of the few places that baseball spectators will be able to catch a game “in person.” Wrigley Field will be closed to spectators at least to start the season, but the Ricketts family, which owns the team, also owns several buildings surrounding the stadium and could open their rooftops to spectators if approved by the City of Chicago.

At GP, we know building rooftops are where HVAC equipment and solar panels usually live, but communal tenant spaces for both residential buildings and commercial offices are also on the rise. A non-profit called Green Roofs for Healthy Cities estimates that rooftops represent 15-35% of cities’ total land area. This, along with anecdotal evidence of more frequent rooftop use, means building owners and designers must take increased foot traffic into account for their rooftop spaces.

Products like DensDeck® Prime Roof Board can make those considerations much easier. For rooftops that will become high-traffic areas, DensDeck® Prime cover boards are designed to manage heavy loads, and protects the roof assembly from increased foot traffic both during construction and during its usage as a communal spaces.

Whether you expect your building’s roof to take on loads from new tenant amenities and their associated foot traffic, or you expect to upgrade rooftop mechanical systems, make sure DensDeck® Prime Roof Board is part of your plan to protect this valuable real estate. 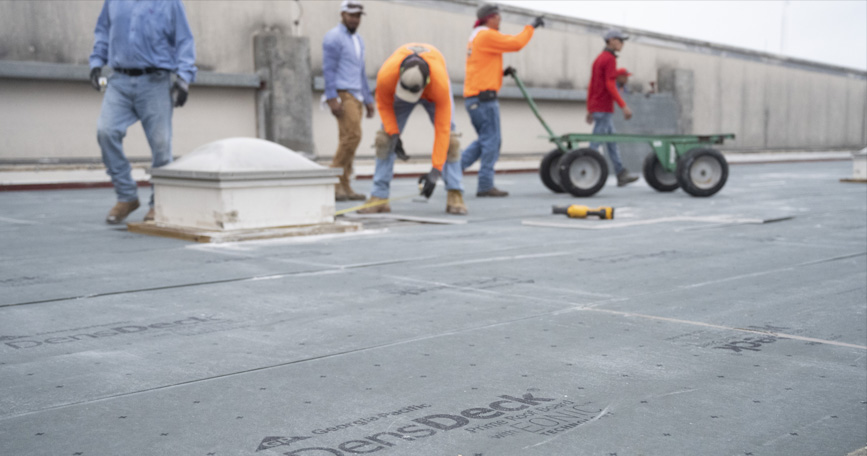 DensDeck® and DensDeck® Prime Roof Boards should not be subjected to abnormal or excessive loads or foot traffic, such as, but not limited to, use on plaza decks or under steel-wheeled equipment that may fracture or damage the panels. Provide suitable roofing system protection when required.